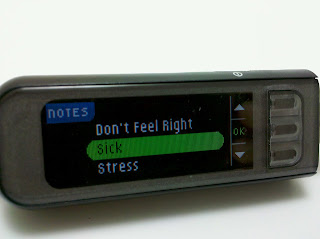 Looks like Medtronic is moving from the One Touch Ultralink to the Bayer Contour Next LINK I used in the trial! According to medGadget, it will now be the Medtronic standard, even shipping all of us the new meter. I want to thank Gene Ostrovsky for linking to my blog post on my meter use during the trial!

As I mentioned in my post, I liked the meter. It was a nice change from the boring, no-frills Ultralink, but I have about a million One Touch strips to use up. I'm trying to be patient, but it isn't the meter I want, its the Enlite Sensors. Happy for the new meter, but let's hope it is the next step before releasing the Enlite!

medGadget posts meter benefits as:
This isn't a revolutionary product, but it is much more pretty and readable!

Here is the news release from Medtronic, posted on Tu Diabetes by Emily Coles.
Posted by Wendy Morgan at 8:12 AM 3 comments:

So, I found another Medtronic Enlite sensor from the trial I packed up for a trip I took this summer and I have been playing with it a bit.

First, I had to insert it manually and this is much more difficult than it looked without proper instructions. But I got it and have worn it for nine days. Shhhh! Don't tell anyone. I'm actually going to restart it again this morning and see if I can sneak another three days with accuracy.

I am of course, using my old Medtronic Minimed Revel 723 pump, so it thinks the sensors end after three days, so I have to restart each time. At the end of the sixth day, I disconnected the transmitter and charged it, then reconnected it and started it like a new sensor. I got three more days, so now I'm going to try another restart and see what happens.

I'm so desperate to keep these sensors, I want to stretch them as LONG as possible. Over the trial I wore a sensor every single day and got mighty used to always knowing my blood glucose. I have grown reliant to the alarms to tell me when things are awry, so not wearing it creates a problem. I stubbornly refuse to use the harpoon sensors, but may be forced to if the FDA doesn't get its a** in gear and get this approved.

I'll let you know how it goes, but I want to be clear, I am stepping outside recommended protocols for using this sensor. I don't recommend doing this. I simply have nothing to loose as the end of my sensor life is very near and I want to see how long I can stretch it with accuracy!

Medtronic Enlite Trial: Over and All I Got Was Deep Longing!

The Medtronic Minimed Enlite Sensor Trial was great, but I am truly missing the whole set up. I did have a few sensors I found tucked in a suit case after my trip and have tried to insert them manually, but it is HARD to do it well. So I lost one, feeling like an idiot, and am wearing one now. I've had it on for 9 days. Shhh! Don't tell anyone.

I am wearing them with my old transmitter and when I say old, I mean old. Like 2009, old. But it works well, I just have to restart the thing after three days (I'm back on my pump that doesn't know they new sensors work for six days without restart). At the end of day six, I unplugged the transmitter and charged it, then plugged it back in a started over. Seems to be working very well.

To wrap up my thoughts about the Enlite Sensor:

1. It is simple and painless to insert with the serter. Harder, but not impossible manually.

2. Six days works great and I am certain you could try for more, but that would be a personal choice because this would only be approved for six day use.

3. The accuracy is spot on. Seriously. The variance I see with my harpoon sensors can swing, not wildly, but with more frequency. This Enlite is accurate with very minimal issues. I did have some, but they were temporary and fixed with calibration. One time I had to End the Sensor and restart, but I think that was somewhat a user error issue.

I can't understand what takes so long. This product has been available for three, going on four years, in Europe. New pumps are being released by small companies with better looks and cooler UI, but I want this. It isn't fancy looking, but it works. We can blame the FDA, but I blame Medtronic for not starting all this sooner. They move much too slow and the FDA brings progress to a trickle.

I am optimistic. The time is passing the same as ever, but I have worn this CGM since April with few breaks and I now rely on it to keep me safe. I can be a mom, focus on my child's care and not worry about myself. If there is a problem, it will be and I love the beeps are minimal.
Posted by Wendy Morgan at 8:31 AM No comments: